TROPISM ART & SCIENCE COLLECTIVE
EARLY HISTORY
History
Tropism emerged in the 1980's as a collaboration between an artist who wanted minimal music to accompany his paintings (Bob van Walderveen), a philosopher who wanted to create text, image and music (Alfred Marseille) and an animation filmmaker who had installations in mind (Robin Noorda). The three of them shared the opinion that a certain degree of humour in art provides the necessary perspective.

They met in 1981 in a studio for experimental electronic music (CEM). The first pre-Tropistic events took place mainly in audiovisual and poetronic spheres. This was also the time that the first four-dimensional paintings were created. The collaboration culminated in a bizarre party in the overgrown garden of the burnt down house of WWII criminal Pieter Menten, located opposite the ancestral home of Robin Noorda.

In 1986 the Tropist Manifest was released and the Tropism Foundation was established. 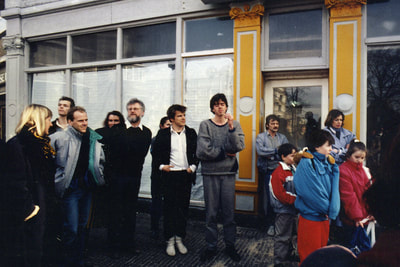 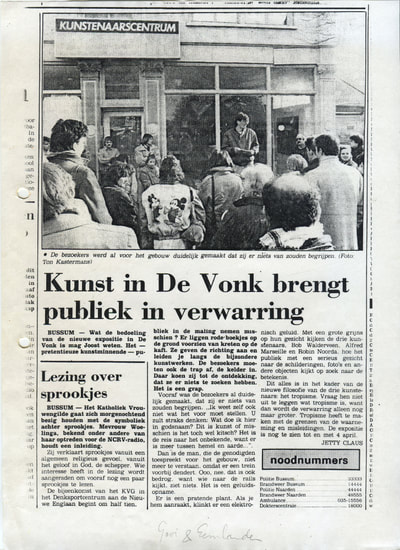 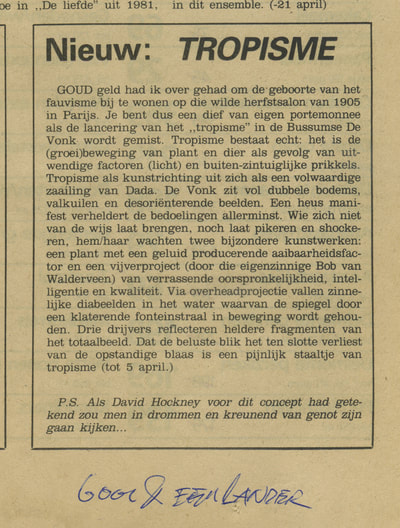 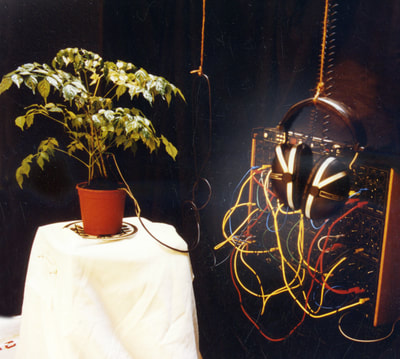 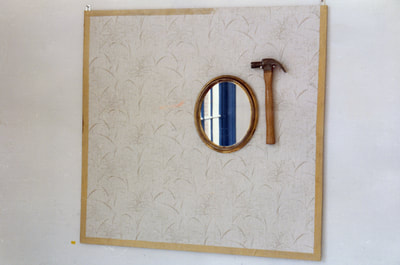 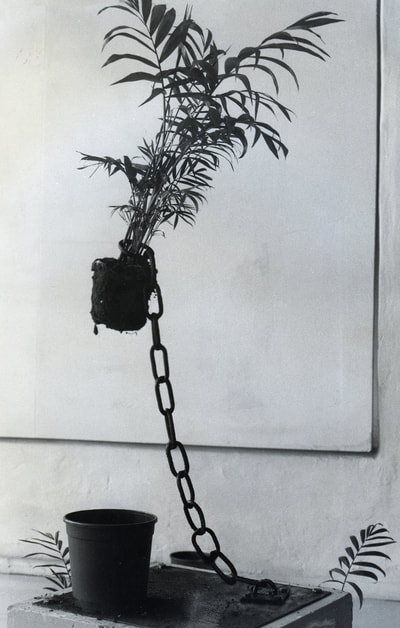 Above, top left:
In the middle the three founders Bob Walderveen (†1995), Robin Noorda and Alfred Marseille, in 1986 during the opening of the first exhibition. Standing at the door is Tropist Sam Samshuizen (†2010).
The legendary first exhibition took place in 1987 in artists' centre 'De Vonk' in Bussum. Tropism was heralded with a much too long-winded opening speech that, certainly also to the relief of the speaker, was interrupted by the roar of a passing train. The roar continued, long after the train had disappeared. Very slowly it dawned on the public that with this act the exhibition had been opened.
Above, bottom left:
The 'Plant Project', consisting of a simple houseplant on a Greek pedestal, connected to an EEG device and responding to the touch of the visitors.  Robin Noorda, Paul Godschalk 1986
Above, bottom middle:
'Hamer Spiegel' (Hammer mirror), Alfred Marseille - 1986
Above, botom right:
'Bij Uitstek' (Springing Sprouts) 1987 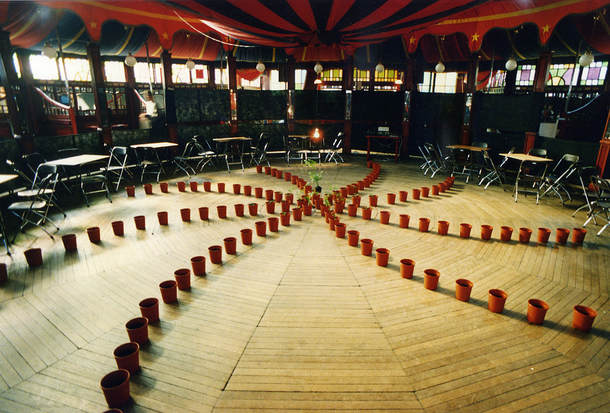 In the 'Spiegeltent' in Ede (1987): 'Bij Uitstek'
​'Tropism around the Axis', a 12-channel piece of music, whereby on entering, the visitor will switch on one of the 12 audio channels, and on leaving will switch one off. ​ 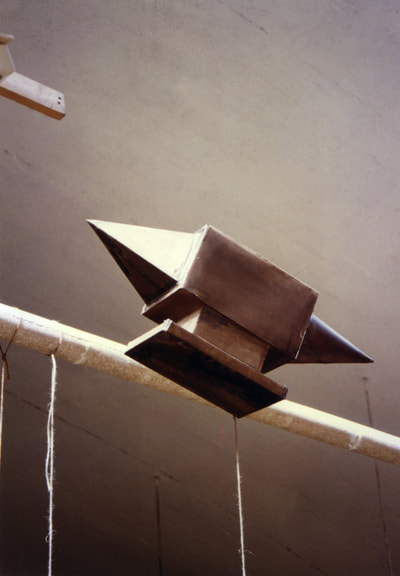 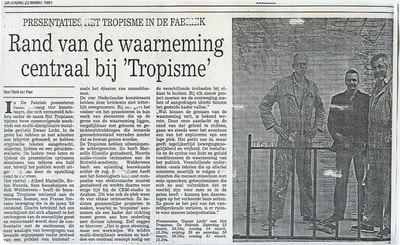 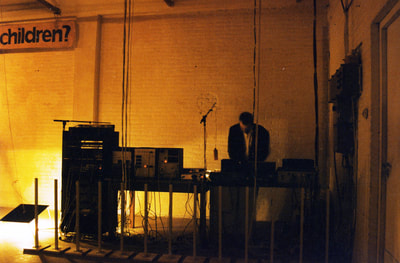 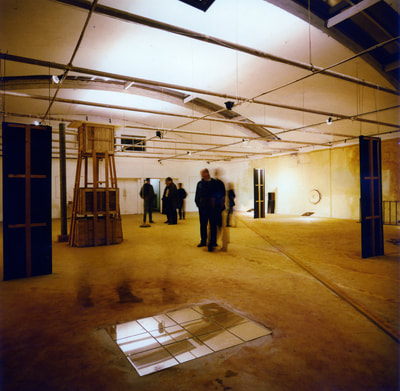 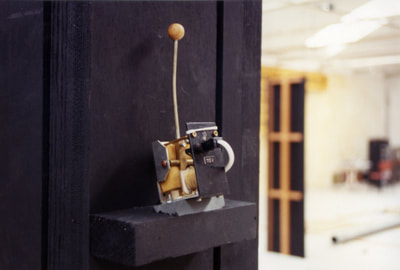 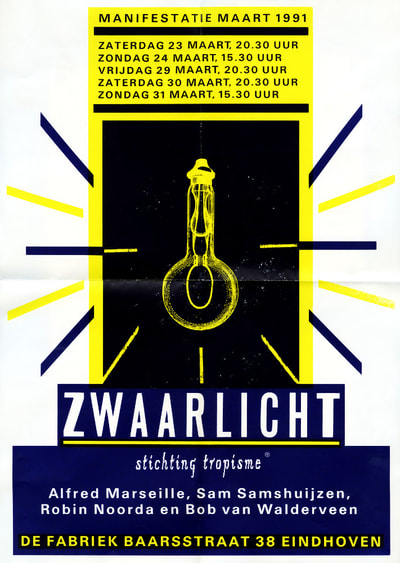 The exhibition 'Zwaar Licht' (Heavy Light) in De Fabriek in Eindhoven (1991) marked a new phase in the Tropists' work. A large machine in the middle of the hall controlled the light and the sound in that space. Within 21 minutes the hall of De Fabriek transformed from a hellish cacophony and bright light to a deathly silence and total darkness. This happened so slowly that nobody noticed. Part of the installation, were a number of large-size Tropistic texts and an unsightly mound of dirt that, only when nobody was watching, suddenly rose and fell.

1994 was a peak year for Tropism with the Tropistic manifestation 'Het raadsel in de Oude Kerk (The Riddle of the Old Church)' in Amsterdam, participation in the festival 'Interazioni' in Sardinia, the great Hermit III event in Plasy, Czech Republic and the sculpture route in 'Beek in Beeld'. 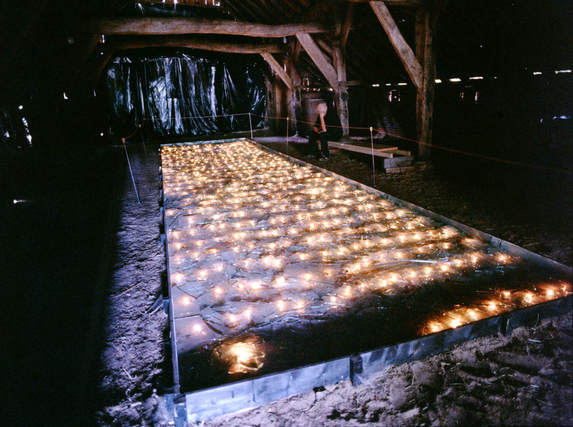 'Beek in Beeld', light installation in sheepfold, 1994 Drenthe
For 'Beek in Beeld', the Tropists placed a 30-meter long river of glass shards in a barn. An old computer generated patterns of light among the shards and controlled pounding hammers on the beams of the barn's roof. ​ 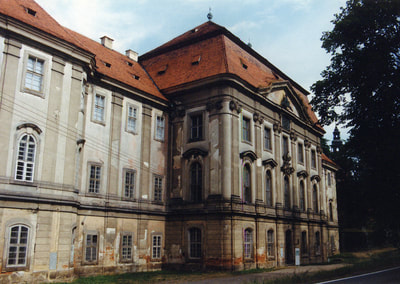 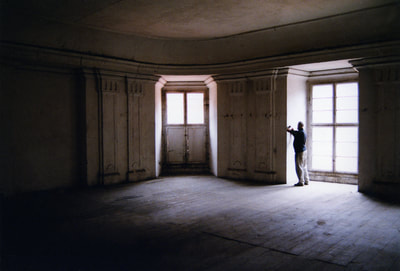 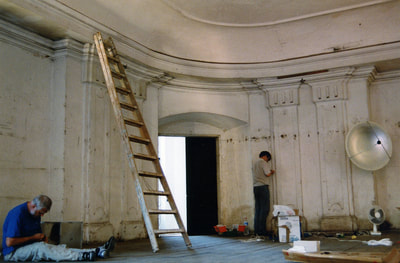 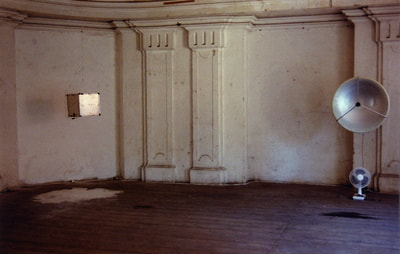 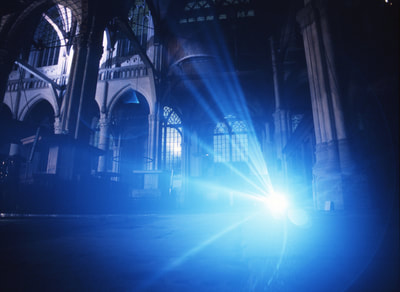 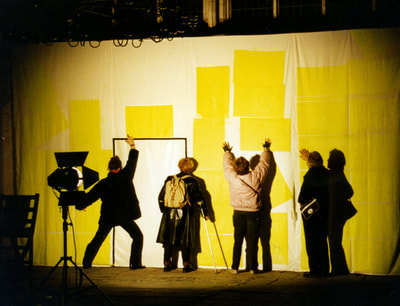 ​'Het raadsel in de Oude Kerk' (The Riddle of the Old Church) was, just like 'Zwaar Licht' based on a cycle of 21 minutes, from light to darkness and from deafening to silence. The sound composition and the lighting were especially designed for the extraordinary space of the church. The 'Shadow Harp', a web of laser beams that encompassed the whole church, influenced the sound mix based on the movements of the visitors. 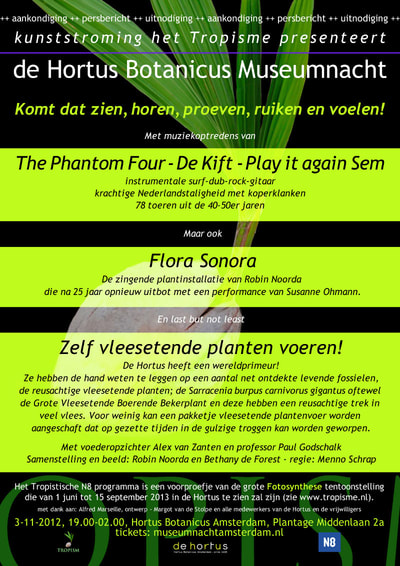 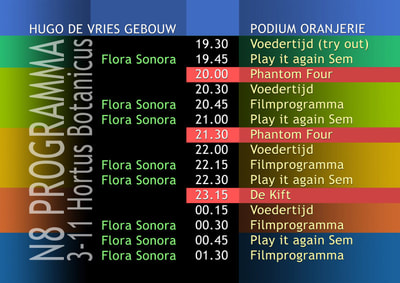 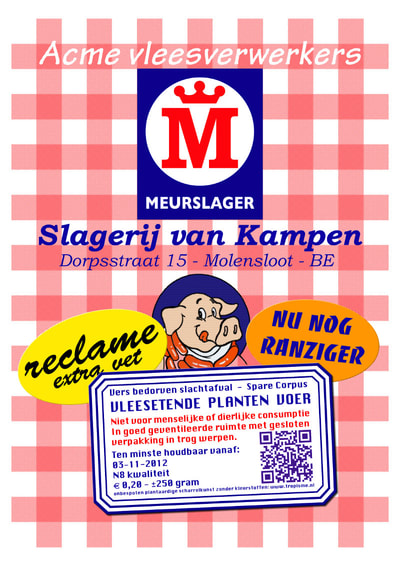 Museum-night - Hortus Botanicus Amsterdam, Netherlands - performances and film
​Extensive press coverage lured the public to the museum night in the Hortus Botanicus Amsterdam. One could buy food for the loudly burping Giant Pitcher plants and a singing plant was molested. We made the eight a clock national news at the NOS public broadcaster.
Other Tropists
Founder Bob van Walderveen died suddenly in 1995. With his death, Tropism, after 10 years, seemed to dissolve. Paul Godschalk was involved in Tropism until just before the first exhibition in 1987 and has recently become active again. Sam Samshuizen was a Tropist from 1987 to 1994, Bo Andrea and Marian Schoettle (USA) were active in 1993 and 1994. Menno Schrap joined in 2012 by co-organising the Tropism performances during the museum night at the Hortus Botanicus Amsterdam.
Margot van de Stolpe (staged photography), Susanne Ohmann (choreography), Bethany de Forest (pinhole photography), Arie van 't Riet (X-ray), Jan Baeke (text), Els van der Monde (preparations), Adriaan van Aelst (SEM) and Frans Holthuysen (SEM) participated in 2013 and 2015 in the Photosynthesis Exhibitions.

Mission
Sustainability and awareness are areas of interest and are involved in most of the Tropistic works although the artists do not emphasize this. It is a message well wrapped to be revealed and experienced as a personal discovery and thus hopefully persist better in the mind of the spectator. A good example of that is our travelling exhibition Photosynthesis, consisting of 122 photographic works, 2 installations and 10 films targeted at shedding new light on plants.